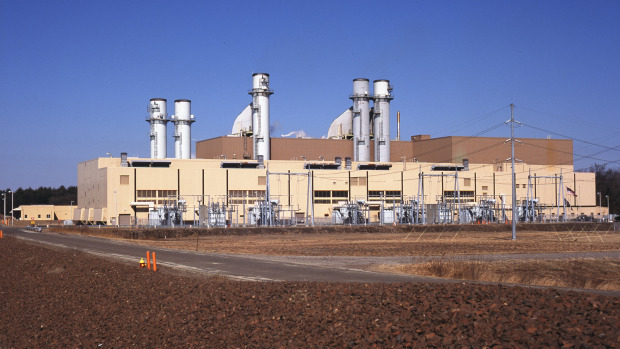 Both units are operated by MMWEC.

While these units share many common facilities, including the same building, they were developed as separate units in the MMWEC power supply. The Stony Brook units are located on MMWEC’s 400+ acre site, which also is home to MMWEC’s corporate headquarters and is located in Ludlow, Massachusetts.

SBEC is Crucial to the New England Power Grid

Dual-Fueled Unit
Stony Brook Energy Center has dual-fuel capability, meaning it can operate on two different types of fuel: natural gas or oil. This fuel flexibility makes Stony Brook uniquely valuable to the ISO-NE power grid during times of high loads, such as during extreme cold weather in the winter months. As electric loads increase during colder months, the demand for natural gas for residential heating rises, decreasing the amount of natural gas available to generate electricity. During these times, Stony Brook can run on oil and avoid natural gas price spikes while still providing generation to the New England power grid. SBEC’s high oil storage capacity, approximately 17 million gallons, permits it to operate all of its units at full load, around the clock, for more than 20 days. During the summer months, when electric loads peak for the New England grid, SBEC’s ability to burn natural gas provides lower fuel costs.

Black Start Capability
In the event of a widespread power outage, Stony Brook Energy Center also has black start capabilities, meaning the facility can operate absent of any outside power source and effectively “restart” the ISO-NE grid. Two of SBEC’s units, Intermediate Unit 1B and Peaking Unit 2A, can be started via onsite diesel generators, which supply power to the two combustion engines. Once either unit starts running, the remaining Stony Brook units can run, which is particularly valuable to the ISO New England market in the event of widespread power outages. SBEC directly interconnects to the Ludlow substation providing 520 MW of generation, intersecting with four other 345 kv transmission lines. Together, these lines energize Western Mass and provide cranking power to the Millstone nuclear units during a system restoration. Therefore, SBEC is one of the most valuable assets to ISO-NE under a widespread power outage.

The Stony Brook Intermediate Unit is a 354-megawatt, combined-cycle power plant that entered commercial operation in 1981. MMWEC owns 90.75% of the unit, or about 321 megawatts of generating capacity. The balance of the unit it owned by Green Mountain Power Corporation (8.8%) and the Village of Lyndonville, VT (0.44%).

The unit’s three gas turbines generate electricity using either No. 2 oil or natural gas, with additional electricity produced using a single steam turbine in the combined-cycle process. MMWEC completed construction of a new natural gas pipeline to serve the Intermediate Unit in September 2002.

The Stony Brook Peaking Unit is a 172-megawatt peaking plant that entered commercial operation in 1982. MMWEC is the sole owner and operator of the Peaking Unit. The unit’s two gas turbines generate electricity using No. 2 fuel oil.